The Mantra That Saved My Life – Moxie On Monday “Maybe she was born with it. Maybe she became it.” – Catherine Grace O’Connell

A Mantra saved my life.

Our greatest challenges in life tend to become our greatest teachers, a blessing in disguise, an opportunity to alchemize suffering into gold.

What I found through life-threatening illness is that we don’t live in the world. We live in our minds.

The secret was connecting my body and my mind together on a positive track. The key was found in a beautiful mantra given to me by a Hawaiin healer while still bedridden with Lyme.

She told me the secret to healing was getting away from the negative thoughts I was holding, most of which weren’t conscious. When you’re dying, you tend to have a lot of negative thoughts…I sure did. What she taught me was so simple and yet life-changing. Every time I had a negative thought, she told me to say to myself over and over, “Om Namah Shivaya,” which means “I am consciousness.” It was so much easier than trying to continually change my thoughts to something more positive with a higher vibration.

I use the same mantra today. Every day. Everyone has a mantra … many of them unconscious.  They’re those things we say to ourselves over and over. Be aware of whether your mantra is positive or negative. Many are things we’ve said for so long, we don’t realize we’re saying them. Yet they have power. Immense power.

My life didn’t change in an instant. It’s been a process, peeling those layers of the onion, the layers that took most of my life to accumulate…the layers I no longer need.

That simple little mantra has carried me through some tough times. It’s lifted me, my mind and my thoughts when I needed it most. Those 3 words, “Om Namah Shivaya,” changed my life or, more likely, saved my life.

Mantras have power. Mantras change lives. Mantras unleash a world of Moxie from within. What’s your Mantra? 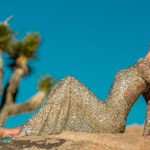 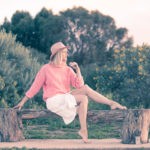 Spring Pastels in the Wildflowers

Looking forward to using the mantra you shared!!

Excellent post as always Catherine. I’ll have to think about my mantra…….I was a professional fitness trainer for women over 40 for years and I couldn’t BELIEVE how they would talk to themselves. It blew me away. Negative self talk is so poisonous. Most women would never dream of speaking to someone else the way many of them speak to themselves. :-/ Such a great reminder……I’m going to work on that mantra!
~Melissa xx
https://www.freshairandfalselashes.com

I know that negative self talk all too well sister. It’s conditioning and programming we have the power to unwind, don’t we? Bravo to you!

When I was in my early 20’s I read You Can Heal Your Life, written by Louis Hay. It’s one of her affirmations . It is- I love and approve of myself, I trust the process of life, I am safe. It has helped me through many terrifying times through the years and now sometimes automatically kicks in when I’m stressed.
Yours is very beautiful. Thanks for sharing. X

She’s one of my heroes and the fact that she began in her 50’s! I’m taking a Science of Mind class right now and it’s so powerful!

A beautiful mantra I will use every day thank you Catherine

Love your story and stories. You’re an inspiration.❤️

I appreciate you so much. It means the world that you took your precious time to stop by and comment.

For many years, my mantra has been: Whatever you think, you’re right.

Words do have energy don’t they sister?

The mantra is beautiful! I’ll try it myself as I don’t have a mantra. Om Namah Shivaya 🙏
I love the meaning “I bow to the inner self”❤️

Love your wisdom & being the living example to others – you do an amazing role of leading the way by powerfully showing up as you do.

Thank you so much sister!!!

Trust me that I wouldn’t have believed something like this could make a difference. But now I realize that words have energy. And energy is what gives us life.
And as Janice said….you are a Moxie master!!
XOXO
Jodie
http://www.jtouchofstyle.com

Isn’t it amazing how something that simple can change our lives??? And, I love that. You’re a knitting ninja. I’m a Moxie Master!!!

Beautiful “Om Namah Shivaya” even without knowing it’s meaning it is calming – thanks for sharing – I began meditation in January and it feeds my heart and soul with hope and joy! Thank you Moxie Master😉😊

Isn’t it just beautiful, sister? Oh I loved that you added so many new sisters to the tribe. Thank you for spreading the word!!!

Oh wow! Isn’t it amazing the power that words can have? It’s almost like we are modeled for our own words, too! I have a phrase that has served me well in so many circumstances in life.. This was given me by a dear friend maybe 20 years ago, “Love them, Love them, Love them.” No matter what. Thank you for your Moxie on Monday! I always love it!

You are such an inspiration to me. I can hear you saying that. From my experience, it’s your daily practice as you do love everyone no matter what.