In My Heart, California

Today is a very special day as it represents the launch of the first annual Fierce 50 Campaign. I am privileged and humbled to share the story of the lovely Sally Lou Loveman! More than 50 women over the age of 50 are joining together to celebrate and honor one another in a supportive, collaborative community. The intention behind the campaign is to shift the perception of life at midlife and beyond as the women behind this campaign truly believe that life is only just beginning.  Sally Lou Loveman is one of those incredible women with a powerful story of her own. Midlife often brings with it significant life changes and Sally Lou’s story is no exception. I’m touched and honored to have personally connected with this inspirational woman and to share her story with you today.

Isn’t life filled with the most delicious ironies and synchronicities.? As Sally Lou is known for her role as a producer on the Oprah Winfrey Show, I’m sensing some divine intervention and a wink to Oprah for putting us together. Having moved from Winnetka, IL to Los Angeles over 6 years ago to begin a new chapter in my life, what’s the likelihood that my Fierce 50 blog partner would live in the same town that I left, with many of the same friends? It didn’t take long for the two of us to bond like sisters, burning up the cell phone lines, while comparing notes on all of our common threads. There’s nothing more beautiful than an empowered woman who knows who she is, and shares her inner thoughts with such daring authenticity and vulnerability. Sally Lou is that kind of woman; never holding back and shining her light through the amazing platform she has created since leaving The Oprah Winfrey Show. It can’t be easy to leave Oprah’s shadow and begin to create a brand new world of your own. I’m honored to share Sally Lou’s powerful story and the lessons that she’s learned along the way.

Just prior to her reaching the half century mark, her role on the Oprah Winfrey Show would come to an end, bringing with it a mix of emotions. In Sally Lou’s own words, just because her dream job ended, that did not mean that her dream had to end. Sally’s dreams are only just beginning as she is carving a new path of her own, taking her gifts and finding new audiences to share her love of connection. Launching her website, lovespeaks, has opened an empowering and creative chapter in her life, allowing her to continue sharing her passion for firing up audiences and fueling them with her sparkly personality.

Traveling back in time, I’ve been connecting the dots that brought Sally Lou to Oprah’s door. She painted the most precious picture of a precocious 14 year old girl completely starstruck back in the 70’s by the Michael Douglas Show. And, yes, I’m dating myself as I remember that show vividly! Sally Lou shares the most delightful story of a young girl who caught a glimpse of her dream and her future in that pivotal moment. In Sally Lou’s words, “ I sat in the studio audience, I spotted a girl on the set with a clipboard. I didn’t know what she did but she was a woman, she looked busy, she wore a headset—I knew immediately that I wanted to do what she did. I loved the smell of the studio, the clicking sounds of the lights, the camaraderie of the crew, the action, and the live excitement. The environment sucked me in and pleased all five of my senses, which is why my career started that day on April 12, 1976.” Sally Lou goes on to tell the story of “clipboard girl” and how she became that clipboard girl. It’s clear that that one moment would change her life forever and this young girl would see “clipboard girl” as a rare role for a woman back in the day. What does it mean to be a “clipboard” girl when your boss is the one and only Oprah Winfrey? Well, it means you have a natural gift for connection and opening the hearts of others. Oprah is a master at making people feel at home and she taught Sally Lou the art of complimenting others and the art of listening. As she says, compliments have a way of disarming someone and spreading positivity. As Director of Audience Services and the Audience Producer, Sally Lou naturally fell into the role of making sure that every single person felt special and a part of the show. She had a fabulous role model in her Father, a very kind Doctor with an abundance of compassion for his patients. Sally Lou learned by example, the immense power of connection by observing the interaction between her loving Father and his patients. She channeled this into the energy of the Oprah preshow, creating incredible bonds with the audience. Hearing stories of the audience members bonding with one another, with even a marriage proposal happening on Sally Lou’s watch, was a hoot! She would read Oprah’s script to prepare for the day’s theme, and then toss it aside to be present and connected to those special moments that happen organically. As she shared with me, “When Oprah ended, church ended.”

Sally Lou opened her heart and allowed me to connect with the emotions she was experiencing, when this chapter of her life suddenly came to an end. As so often happens at midlife, we are forced into a process of reinvention. The key part of this reinvention happens in our inner world. In an interview I watched on a show called, “Conversation with Giants,” Sally Lou is very courageous in talking about how the Universe sometimes forces us to stop and to turn within. In her own words, she had some personal matters to confront. This led her to choose a powerful reboot of both her life and her career. She talks about reinvention as a way of “tweaking what you already do well” and surrounding yourself with a diverse networking team. She’s a natural, and says that she doesn’t feel like a giant but that there is a giant within her. And, from what I’ve heard, I would say there’s some truth to that statement! Sally Lou shares a story of her nursery school teacher, Mrs. Thompson, telling her parents that she likely wouldn’t make friends as she was too shy. Whaaaaat?! She’s a kindred spirit for sure as most of my teachers said the same thing about me! Sally Lou is a determined woman who, even as a young girl, defied those who discounted her in any way. When the Oprah show ended, a part of her felt as though life was over. I asked Sally Lou; if she were to travel back in time and share some words of wisdom with that young woman, what would she tell her? In classic Sally Lou style, she shares, “I am so glad you woke up and your head is out of the sand. Life is so much better when you’re awake. I am so glad you had an incredible 50 years.” Watching Sally Lou in action in her new entrepreneurial role, it’s clear she has a gift and she’s courageously sharing it with new audiences all over the world. With a lively personality, an infectious laugh, and beauty and talent to boot, this woman is on fire and one to keep your eye on. Oprah taught her well and she’s taking those lessons onto new frontiers and connecting with new audiences. Midlife is a powerful time of reinvention and as Sally Lou says, she can only work for Oprah or herself. She’s living proof that just because one door closes, there are endless doors that will open for you if you just believe in yourself. She imparts beautiful wisdom amassed from the lessons she has learned on this beautiful journey that is only just beginning. I’m grateful for The Fierce 50 Campaign that brought this very special beauty into my life and into my heart forever. Sally Lou, you are a true joy and a force to behold. I cannot wait to see all that’s ahead of you on this brand new journey.

You can find Sally Lou Loveman at her website and on Instagram and Twitter @lovespeaks2u. If you are interested in learning more about The Fierce 50 Campaign and how you can join in the movement, contact info@catherinegraceo.com. A fabulous interview on Thrive Global with ESPN’s Hannah Storm can be found here. Hannah is joining forces in supporting women at midlife and beyond by sharing her insights and life experiences with all of us. You can find all of the bloggers actively involved in The Fierce 50 Campaign by clicking here.

A special thanks to our sponsors: Onzie, Madison Reed, HSI Professional, and Awe-Inspired. Our community The Fierce 50, women in midlife and beyond, are so grateful for your support! 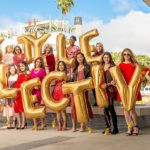 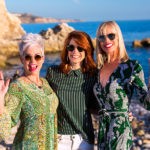 The Gal In The Middle

Catherine,
Loved getting to know more about Sally Lou. I watched the entire “Conversations with Giants” interview and walked away believing that of the two of them… Sally Lou was the giant. She needs her own show. Thanks for putting us all together and giving us the opportunity to support and collaborate as we get the word out about Fierce 50 women! Brenda